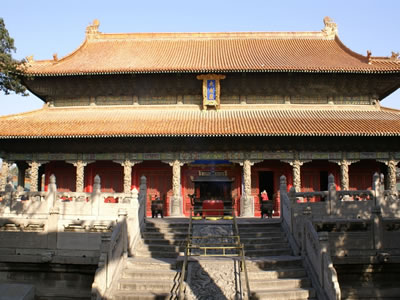 The Dacheng Hall is the main hall of the Confucian Temple.3Big golden letters\"Dacheng Hall\", Word diameter1Rice is the handwriting of Emperor Yongzheng of the Qing Dynasty. The main hall has nine eaves and nine ridges, and surrounds the cloister. It is also called the Three Palaces of the East with the Palace of Heavenly Peace and the Temple of Heaven. Around the main hall28Root carved dragon stone pillars, all carved from whole stone, originally 13 years of Ming Hongzhi (AD1500Years) Carved by Huizhou artisans, re-engraved in the second year of Yongzheng of the Qing Dynasty. Two mountains and back eaves18Eight octagonal pillars, decorated with Yunlong, shallowly carved on each side9Tuanlong, each column72Of1296article. Front eaves10The root is a deep relief, with two dragons flying on each pillar, coiled and rising, orbs engraved in the middle, and cloud flames surrounding each other.10The dragon pillars face each other, each with its own variation. Nothing is the same, the shape is beautiful and vivid, the carving is exquisite and clear, the knife is strong and powerful, and the dragon posture is lifelike. This is Qufu's unique stone carving art treasure. It is said that when the Emperor Qianlong of Qing Dynasty came to Qufu to worship Confucius, the stone pillars were wrapped in red cymbals, and they were afraid to be seen by the emperor. I am afraid the emperor would blame him for exceeding the palace. The architectural art of Dacheng Hall shows the talent and wisdom of the working people in our country.

The statue of Confucius is enshrined in the middle of Dacheng Hall, sitting tall3.35M, wearing a crown of twelve centipedes, wearing a twelve chapter royal suit, holding Zhengui in his hand, just like the ancient emperor ritual system. The four sides are on the two sides, with the east to the west being Fusheng Yanhui and Shusheng Kongji, and the west to the east being Zongsheng Zengshen and Yasheng Menglu. Twelve philosophers are in the east, Min Yin, Ran Yong, Duanmuci, Zhong You, Bu Shang, You Ruo, and Ran Geng, Zai Yu, Ran Qiu, Yan Qi, and Sun Sun Division, Zhu Xi.