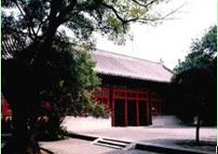 Also known as\"Yan Sheng Gong\"On the east side of Confucius Temple\"The first in the world\"It is said to be the residence of Confucius for a long time, and it is also a typical building in which the government and the inner house of the feudal society are united.

In Chinese history, since Emperor Han Wu\"Dismiss a hundred schools, respect Confucianism alone\"In the future, all the emperors\"Confucianism\"Rule the world, keep chasing after Confucius,\"Yan Shenggong\"This number began in the Northern Song Dynasty and the second year (1055Years), Song Renzong\"Pursuing Confucius as the text propaganda and honoring the king, and sealing his princes as the text propaganda, the descendants of the Confucian family went to the country and attacked the nickname.\"Forty-six generations of Sun Zongxuan, the King of the Holy Text, wished to be the Holy Father.\"Yan Shenggong\"This number was in the first year of Song Yuanyou (1086(Year) was once changed to Feng Sheng Gong, but soon after three years in Chongning (1104(Years) and it was reinstated as the Holy Father.\"Yan Shenggong\"This number continues to1935In 1949, the government of the Republic of China changed the name of Confucius's 77th generation\"Dacheng to the first division worship official\"Accept\"Special officer treatment\"。\"Yan Shenggong\"This number has inherited more than 40 people from 32 generations.800In the past few years, the official ranks have also risen again and again.\"Cheng Fenglang\"Rise to the first grade\"Doctor Guanglu\"Then, when the Baiguan dynasty met, he was listed as the first civil official.

Confucius Gate:孔 On the upper part of the gate of Fuqufu, a gold character hanging on a blue background\"Holy House\"The plaque is said to be written by Yan Song, the Ming Dynasty. On the bright pillars on both sides of the door, a pair of couplets are hung: with the state government, Xiu'an rich and honorable residence, the same day and old articles on moral saints' home. According to legend, the couplet is written by Ji Jun of the Qing Dynasty, Ji Yun is the famous Ji Xiaolan. Interestingly, Shanghai United\"An Fu Honor\"的\"富\"Word\"Article Morality\"的\"章\"word,\"富\"One word missing,\"章\"The middle of the word goes straight up to\"立\"The horizontal section means that the post of the official of the Holy Saint is listed as a first-class product.\"Rich and no head\"Confucius and his theory\"Dexian Tiandi, Daoguan ancient and modern\",natural\"Article Zhang Tongtian\"。 Confucian sacrifice mural : The inner house of Kongfu has a shadow wall. On the shadow wall is an ancient painting. It depicts a monster, like a unicorn but not a unicorn. It is an imaginary greedy beast named\"贪\"或\"Greedy\". The monster opened its teeth and claws, raised its breasts, was ambitious, rolled its tongue out, and covered with flames. Surrounded by jealous jewels, it has all the treasures, but the possession of these wealth still can't satisfy its desire, and it wants to eat the sun, which is really difficult to fill.

Confucius established this mural to warn the people not to be greedy, and to warn future generations to abstain from greed regardless of whether they are officials or businessmen. It was said that\"Yan Shenggong\"When you go out, you have to stop and watch the painting, and someone shouts\"Greedy\"In order to be honest and clean, don't be greedy and corrupt.